The congruential generator is one of the most common generators. It generates a sequence of pseudo-random numbers X with the simple formula:

M is called the modulus, a the multiplier, c the shift, and \(X_0\) the seed. There are often separate functions for setting the seed. In C its called srand(). The seed is often set to the computers CPU time like this:

It is usual to choose M to make the modulus operation easier for the computer to calculate and then to choose a and c to make the period of the generator as long as possible.

Sampling from other distributions

So how can we sample from other probability distributions?

And sampling from a discrete uniform distribution 0,1,2,3,…C-1. Where C is an arbitrary number, can be done like this:

The polar method is another method of sampling from the standard normal distribution, which supposedly is faster because it avoids using sine and cosine:

A number of smart direct sampling algorithms for other distributions have been found, and can probably be found on the web by a simple google search.

Making your own sampling algorithms

The direct sampling methods are usually made by using some general sampling methods, and some are made with pure math magic 🙂 Here I explain two of the most common methods of creating algorithms for sampling from a distribution.

On the the y axis we have probability from 0 to 1 and along the x axis are all of the values for X.

Since the cumulative distribution function is monotone non-decreasing we can sample a X value from it by retrieving the x value which has the y value equal to some sample u from U(0,1).

Lets look at an example. Lets say we want to sample from the exponential distribution which has the probability density function:
\(f(x) = \lambda e^{-\lambda x}\) 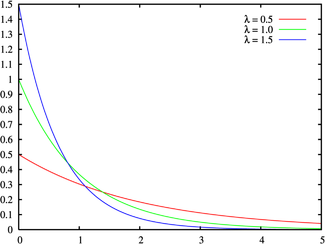 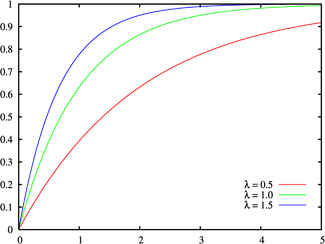 This is a universal method, but it can be slow if there is no fast way to evaluate the cumulative distribution.

This method can be used if direct sampling from the probability function f(x) is difficult. If we have another probability distribution g(x) which we know an easy way to sample from and the constraint \(f(x) < M\cdot g(x)[/latex] for M > 1.

The metropolis algorithm can generate samples from any probability distribution, but it is slower than direct methods.

From the theory of Markov chains there is a theorem that says that if we have a reversible transition probability matrix P so that:
\(w_iP_{ij} = w_jP_{ji}\)
then then chain will converge towards the equilibrium distribution w = P(X).

So have do we insure that we have a transition probability matrix P which is reversible as defined above?

This was a demonstration of the discrete case, but it holds for the continuous case also were Q then is swapped with a continuous symmetric distribution f instead, for instance the normal distribution with the current state as mean value.