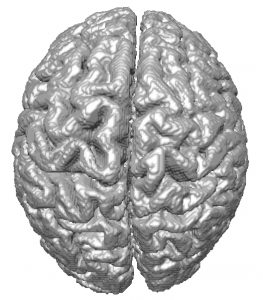 The actual contour, is defined by the zero level set, which are the coordinates (x,y,z) where the level set function is zero:

To move the contour, the level set function is derivated in respect to time:

Here \(\alpha \in [0,1]\) is a weighting parameter between the intensity and the curvature term. The parameters T and \(\epsilon\) are used to drive to contour toward voxels with intensity in the range \(I \in [T-\epsilon,T+\epsilon]\). 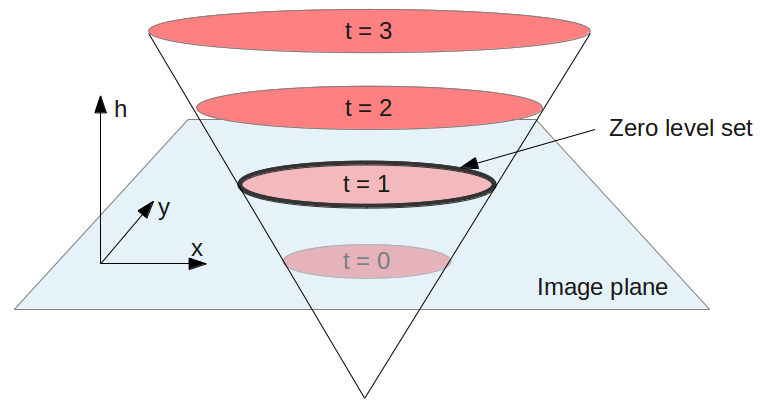 The level set method is very computationally expensive because each voxel has to be updated for each iteration. However, each voxel can be updated in parallel using the same instructions, making level sets ideal for GPUs (see [2,3,4] for details on different GPU implementations). I have created a simple GPU accelerated version of level set volume segmentation using OpenCL. The implementation uses 3D textures on the GPU to reduce memory access latency. Read more on textures in OpenCL my previous post on Gaussian Blur using OpenCL. If you want to look into further optimizing the level set computation you should look into the narrow band, sparse field or fast marching methods (see [1] for more details).

The level set gradient \(\nabla \phi\) and the curvature \(\kappa\) has to approximated numerically. This can be done using the upwinding scheme.

The level set function has to be initialized. It is common to initialize it to the distance transform which calculates the distance from each voxel to the initial contour. The signed distance is negative for voxels inside the initial contour and positive outside. If we use a spherical initial contour the signed distance transform can be easily calculated in parallel for each voxel using the following equation \(d = |\vec x – \vec c| – r\) where \(\vec x\) is the coordinate of the voxel, \(\vec c\) is the position of the center and r is the radius.

The program uses the Simple Image Processing Library (SIPL) for loading, storing and displaying the volumes. This library is dependent on GTK 2.

Below are a set of commands for downloading, compiling and running the example on Ubuntu.